How Green Glue Products Can Help You Create a Quieter Home

Many homeowners spend significant amounts of money to renovate and redecorate their homes in the hopes that they will finally be able to create a quieter living space.
It’s hard to blame them for doing that.

When you get the chance to sleep in on the weekends, the last thing you need is to be woken up by the sounds of construction coming from a neighbor’s house or from the noise coming from a birthday party nearby. If you’ve been dealing with a noise problem for a while, you’ve probably used all kinds of products to counter that.

Over the course of this article, we will discuss how Green Glue products work, the different variants available, and how you can use them best in your home.

Products Features in This Article:

What Is Green Glue?

Let’s start by first defining what Green Glue is all about.

The most basic product offered by the Green Glue Company is a kind of adhesive. Here is the basic Green Glue product in question so that you don’t have to look online for it. Officially, it is known as the Green Glue Noiseproofing Compound.

Green Glue features a texture that can be best described as viscoelastic. You may find its texture to be reminiscent of a popular condiment, with that being ketchup.

Before we go any further, it’s important to point out something about this product. If you’re planning to use it as something that will link two objects or surfaces together for an extended period of time, you may end up disappointed.

Green Glue Noiseproofing Compound is not a permanent adhesive, as noted by the manufacturers themselves, and is not supposed to be treated as such. You can use it between walls and other surfaces, but it’s probably not something you should reach for if you are looking to mount something on the wall.

The real draw of this noiseproofing compound is that it can effectively hamper how sounds travel inside your home. Once sound waves reach this product, they get converted into a small amount of heat. The sounds will end up being muffled if not silenced altogether.

This is the kind of product that you will love having at home if you have kids who enjoy playing video games or instruments. It’s also great for just ensuring that everyone is able to sleep peacefully, including you.

A useful way to think about the Green Glue Noiseproofing Compound is to consider it as a kind of shock absorber.

When sound travels through the air, it does so in the form of waves. These waves disturb the surrounding air in an open space and produce the sounds that then make their way to our ears.

Now, picture the sound waves coming from one room inside your home as they attempt to make their way into another room. They will often have to pass through a wall to do so.

If the walls in your home are thin and not stuck together by any kind of special adhesive, the sound waves will be able to pass through them relatively easily. The noises will still be quite loud when they come out on the other side.

That is where the noiseproofing compound can prove to be of assistance.

The heat produced is minimal though so don’t expect it to work as a source of warmth during the winter. What you’re really after here is the sound-reducing capabilities of the compound.

How to Use the Green Glue Noiseproofing Compound

Now that we know more about Green Glue’s Noiseproofing Compound and how it works, let’s turn our attention to installation.

To get started, you will need to gather a few materials:

Here now are the steps:

From the moment you start to apply the Green Glue, you have about a 15 minute window to fasten the sheets of dry wall together.

Another important thing to note here is that the Green Glue may not have a discernible impact on noise levels inside your home immediately. The material needs about 7 to 8 days before it can start working its magic. The best results will start to manifest themselves 30 days after you introduced the Green Glue-infused layers of dry wall to your home.

By the way, if you are planning to make changes to many walls in your home, consider getting this 12 pack of Green Glue Noiseproofing Compound.

If you would prefer not to rely on a caulk gun in order to apply the noiseproofing compound to your walls, you can opt for the 5 Gallon Bucket of the aforementioned material. Instead of using a caulk gun to apply the compound, you can reach for a trowel. 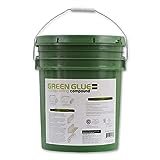 Other Green Glue Products That Can Help with Noise Reduction

Though their noiseproofing compound is probably their most popular product, the folks over at the Green Glue Company have other offerings that can be useful for the purposes of making your home a more peaceful peace. We will highlight those products in this latter half of the article.

The Green Glue Noiseproofing Sealant is packaged quite similarly to their noiseproofing compound so it’s easy for people to get the two of them mixed up. It’s in your best interest to differentiate them though as they have different uses inside the home.

As you may have already guessed, this material is intended to be used on cracks or gaps that have opened up. More often than not, this sealant is used to fill in the cracks that have appeared on floors, walls, and other stable surfaces inside the home. 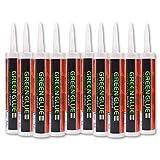 The noiseproofing sealant has been formulated to be more flexible than the compound. It has to be because you may need to apply it at odd angles to cover openings completely.

The great thing about this sealant is that it maintains that flexibility over an extended period of time. It won’t stiffen up and crack thus leading to the opening being exposed once again.

People also like working with this sealant because it doesn’t get in the way of your home design. After it has been given the opportunity to dry, you can easily paint over the sealant in order to blend it in better with the surroundings. The sealant can also work well with other finishing materials.

How to Use the Green Glue Noiseproofing Sealant

First off, let’s talk about the instances wherein you should avoid using this sealant.

This sealant will struggle to fill in larger gaps. The Green Glue Company specifically notes that gaps sized 5/8” or larger will be tough to fill for this sealant. You can still apply this sealant to that gap, but it will have to be used in conjunction with a backer rod.

You should also not count on this seal to plug water leaks or to stop cold air from entering your home. Its main purpose is to prevent sound waves from traveling undisturbed from room to room.

The manufacturers also remind you to refrain from using this sealant near pipes and other copper fixtures.

With those reminders out of the way, let’s get to the process of applying this sealant.

An Additional Note on the Noiseproofing Compound and Sealant

You may end up with some leftover Green Glue Compound or Sealant after completing your home improvement project and you can indeed store them for future use.

According to the manufacturers, both the compound and sealant will remain usable for up to a year from its manufacturing date. If you took the time to store it properly at room temperature, the products can remain in working condition for an even longer period of time.

The manufacturers also say that you can perform a simple test to see if the compound or sealant can still be used. They urge you to dispense some of the material and then see how it flows.

The material should move like ketchup if it is still good to go. Clumps in the material are telltale signs that you need to purchase a replacement.

Compounds and sealants are not the only ways for you to cut down on the amount of noise present inside your home if you choose to rely on Green Glue products. They offer additional items too such as noiseproofing clips.

Green Glue’s noiseproofing clips will mechanically decouple one layer of the wall from the other side.

So, what does that achieve?

Since the layers of the dry wall are no longer directly in contact with another, the sound waves will have a tougher time moving through them. The gaps inside the wall that were created by you decoupling the dry wall sheets will act as extra buffers that prevent the noise from spreading. 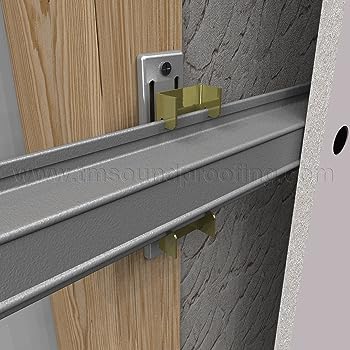 Even if the vibrations are strong, they will only significantly affect one sheet of dry wall. The other side may end up only vibrating slowly or not at all.

Green Glue’s Noiseproofing Clips are great for addressing the mid to high frequency noises that can sometimes ring out through your home. In order to get the most out of these noise-reducing items, the manufacturers recommend that you pair them with a hat channel and connect them directly to your ceiling joists.

The last product we will talk about in this article is the Joist Tape from Green Glue. The aim of this particular item is to address the squeaking noises that may be produced when the floor tiles make contact with the joists. It functions as a form of cushioning for your floor tiles.

You will be glad to have this joist tape available to you because those squeaking noises can be incredibly annoying.

While this joist tape does not specialize in providing insulation, it can still contribute a bit in that department. If you cover your floors with it, the energy savings you realize could be even greater. 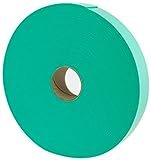 It’s best to use this joist tape while work is still ongoing on your floors. That way, it can be applied directly to the floor before the tiles are placed over them.

One last thing, you should remember to do is to clean up your floors before you stick this joist tape on top of them. By failing to clean your floors properly before covering them with this tape, the application may turn out uneven and the tape itself may not be as effective as it could be.

There are all kinds of products that can be used if your main goal is to reduce how much noise you have to deal with at home. The people over at the Green Glue Company have made it their mission to offer you only the finest noise reduction items, and as you have seen, they have brought some great choices to the table.

You can bank on those products working exceptionally well if you decide to start using them inside your home.