If your garage or shop is too hot, you need to cool it down with a high-velocity shop fan. Generating a high amount of airflow, these strong fans can also be quiet allowing you to work peacefully in cool comfort. They are ideal for cooling off large spaces or areas like a job site. Here are a few tips and reviews to help you find the best high-velocity quiet fan for your garage or workshop.

If you are trying to cool off large areas, there are lots of benefits to using a high-velocity shop fan.

High-Velocity Air Flow – Outbuildings, gyms, shops, and garages are generally warmer than an office or house. With a shop fan, you can push a lot more air through your workspace. With a high-velocity fan, you can circulate air faster to keep you cooler, so you can work longer.

Low Noise Range – Typically, a high-velocity fan will be noisier than a regular fan. It can be subjective as to what a quiet fan really is, but many high-velocity shop fans these days have great designs that will keep the decibel level in an acceptable range.

Adjustability and Portability – If you move your shop fan around during the day depending on the project, you will need one that is not only portable, but also adjustable. Many units come with an adjustable base, a swiveling head, carrying handles, and wheels. Keep in mind that if the fan is too large, then it won’t be as easy to move or fit into a cabinet or bench.

Dust Resistance – A shop can be a dirty and dusty environment, particularly wood shops that create a lot of dust. Grime and grit can collect on the fan’s blades and also get into the housing causing the fan motor to stop working. Designed to be dust resistant, high-velocity shop fans can last for years with the right cleaning and maintenance

Axial fan: Made of blades that rotate around an axis, an axial fan is similar to a ceiling fan. As the blades spin, they create a low-pressure zone that will suck air through the fan blades from the back to the front. An axial fan will have a higher airflow rate, but low pressure, so they use less power than a centrifugal fan. This makes them better for a situation that needs a large amount of air moved around.

Centrifugal fan: With vents on the sides of the fan, the air will get sucked in and then forced out a duct found in the front of the fan. You get a lower flow rate than an axial fan, but it will have a higher pressure. A centrifugal fan is a better option for units that cool and heat, but they do work better than an axial fan when used for drying carpets and floors.

Blade size and number: The longer and wider the blades, the more airflow your fan will be able to generate. If you have more blades, you will also get the same result. However, this will also give you more resistance due to the larger blades or higher number of blades, resulting in more power used by the fan.

Speeds: Typically, a shop fan will come with three-speed options. It’s always a good idea to check a fan’s speed range before you buy it. Usually, your options will be low, medium, and high. But keep in mind that the high option is only high if it meets your expectations of that speed.

Tilt: Usually, a shop fan will not oscillate. The only way you can have any control over the airflow direction is with a tilt option if it happens. With this feature, you can direct the airflow from a shop fan to the ceiling in the wintertime to circulate warm air through a room or push cool air up to a second floor in the summertime. 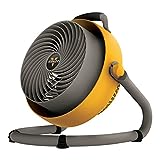 With rugged durability, the Vornado 293 is a heavy-duty shop fan that can stand up to a tough environment. Created for use on the job site, workshop, or garage, the Vornado 293 features a steel base and an almost indestructible body. It gives you a pretty powerful airflow with air movement at 100 feet with very little noise.

Featuring a ball-bearing motor, you never need to oil the Vornado 293, and it also comes with a special shield that resists dust. Using Vortex Action, it can circulate air all over your shop that is cool and fast to keep you comfortable. With three speed settings, you can choose from 1500, 1200, or 950 RPMS to find just the right amount of air control.

With the tilting head, you can direct the airflow from the Vornado 293 to the areas of your workshop where you need it most. This multi-purpose fan gives you precise, high-velocity air for power drying, air pumping, exhausting, or cooling. It also has a compact size, so you can place it out of the way places while still staying cool.

The Vornado 293 is an easy to carry shop fan that comes with a carry handle for easy portability. It also has a 10-foot grounded cord, so you can easily find a plug nearby. The Vornado 293 gives you a lot of air for its size and can either be floor or wall-mounted to give you the steady and strong ventilation you need in a wide range of environments. 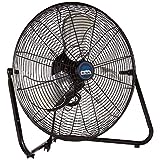 The B-Air BA-FT-20X is a UL Certified fan that can be used in a lot of situations. It comes with an adjustable tilt feature, so you can direct your airflow where it is needed the most. With three speeds, you can find the precise amount of airflow you need for the job without creating a lot of noise.

Constructed with a durable metal housing, it can withstand tough job site or warehouse environments. The versatile B-Air BA-FT-20X is also perfect for use in the kitchen, workshops, or in the garage. Easy to move, this is a very portable fan that comes with a carry handle.

The B-Air BA-FT-20X can either be floor or wall-mounted providing different options for your cooling needs. It can also rotate 360 degrees on a stand making it easy to cool off an entire room from above. And, the housing is easy to take apart and assemble allowing for cleaning and maintenance.

The small grid spacing on the grill keeps out paws or small fingers as an added safety measure. Measuring 20 inches, this multi-purpose fan is perfect for any area where you need to circulate the hot air out and also keep the noise level down. 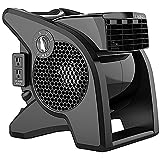 Featuring a pivoting blower, the Lasko’s Pro-Performance High-Velocity Utility Fan allows you to direct air where you need it quietly. Perfect for basements, workshops, garages, or exercise rooms, this fan works well when drying, exhausting, ventilating, or cooling. And, it comes with an easy-grip handle that makes transporting it fast and simple.

Arriving already assembled, the Lasko Pro-Performance Fan includes a reliable ball-bearing motor, durable construction, and two 120-volt accessory outlets. This multipurpose fan can be used wherever you need it and comes with three powerful speed settings. 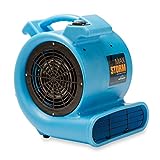 Providing large amounts of air, the Soleaire Max Storm features a durable housing that can take on a harsh job site environment. This lightweight fan draws low amps and is perfect for professional use settings like carpet cleaning services. Efficient and simple to use, this is a professional quality product that delivers great performance without a lot of noise.

Using a roto-molded polyethylene shell, this durable fan can withstand a harsh environment. You can actually just leave this fan at a job site for the day to let it work and pick it up again in the afternoon after the carpet or area is completely dry. This is an easy to maneuver fan that only weighs 25 pounds, so it is simple to manage.

Ideal for industrial and rugged commercial situations, the Soleaire Max Storm also works well in hard to reach areas like crawl spaces, attics, and closets. With its efficient motor design, it draws low amps on both of the speed settings. It also operates at three different angles including 90 degrees, 45 degrees, and horizontally.

With a recessed water-resistant control switch, you can customize your drying process with the two separate settings. It also comes with a 25-foot power cord that wraps easily around the top of the unit for easy handling. 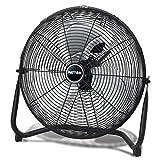 Making it easy to manage airflow at your job site or in your home, the Patton PUR1810C is a high-velocity fan with three powerful speeds. Measuring 18 inches wide, this durable fan features metal construction making it perfect for workshops and garages. This versatile fan also comes with an adjustable tile head making it ideal for drying, ventilating, or cooling any room or area quietly.

With three speed settings, you can maximize air circulation, air exhaust, and air intake. With a large 18-inch blade and adjustable tilt head, you can effectively move air across large areas to keep them comfortable and well-ventilated. Plus, you get a powerful motor to enhance the fan’s performance.

The Patto PUF1810C includes a powder-coating over its metal housing for long-lasting and reliable use. And, it comes with a durable metal rear and front grill. The two-prong plug and carry handle also provide easy portability.

The winner of the best high-velocity quiet shop fan is the Vornado 293. Featuring heavy-duty, rugged durability, the Vornado 293 is perfect use on the job site, workshop, or garage. With a steel base and an almost indestructible body, you can either floor or wall-mount it to give you the steady and strong ventilation you need in a wide range of environments.
Giving you a pretty powerful airflow with air movement at 100 feet, the Vornado 293 has a tilting head, so you can direct the airflow where you need it most. With three speed settings, you can choose from 1500, 1200, or 950 RPMS to find just the right amount of air control. And, it features a ball-bearing motor and a special shield that resists dust.
This multi-purpose fan gives you precise, high-velocity air for power drying, air pumping, exhausting, or cooling. It also has a compact size, so you can place it out of the way places while still staying cool. The definite winner of the best high-velocity quiet shop fan is the Vornado 293 hands down.

We are the best source for information on the quietest gear for your home or office, as well as information on how to make anything quieter to give you tranquility and restfulness.

How We Are Funded – Amazon Affiliate Disclosure

SoundProofPros.com is a participant in the Amazon Services LLC Associates Program, an affiliate advertising program designed to provide a means for sites to earn advertising fees by advertising and linking to Amazon.com.