There can be quite a lot of things involved in a DIY soundproofing project. Naturally, one of the first things that you’ll consider is what steps you need to take when soundproofing anything. Alongside this is the materials that you’ll need when doing so.

You’ll also have to consider what will work best, how to apply certain materials, and much more. While what you’ll need can vary somewhat from project to project, you’ll always need to include caulk. However, this is something that many people may overlook, given that they’ll often ignore the gaps in a room.

As a result of this, quite a large number of people have seen their work negated because the sound may still leak through some of these gaps. Naturally, you’ll want to avoid this, which is where caulk can be quite beneficial.

However, choosing a caulk can be slightly more complicated than you might expect, with this primarily being because of the two main types; acoustic caulk and regular caulk. Though many people may not have put too much thought into the decision, it’s something that could have quite a significant impact on your soundproofing project.

Though acoustic caulk can often be the better-recommended option, this can often vary depending on what your needs are. As such, it’s worth looking at what the differences between the two are and where they can best be used. 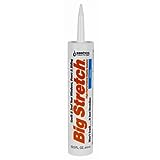 The Big Stretch SashCo Caulk is one of the best acoustic sealants on the market, with this being driven by a few important reasons. The first of these is that it lasts much longer than many of its competitors, so you shouldn’t need to re-seal any areas in the near future.

Alongside this is the fact that it’s quick and easy to apply, with this drying much faster than you might see elsewhere. While it also offers a certain amount of water protection, it isn’t recommended for many underwater uses. You should also avoid any places that will come into contact with a large amount of water quite regularly.

One of the last other drawbacks seen with the Big Stretch SashCo Caulk is that it can attract a large amount of dirt, which could be an issue for some of us. 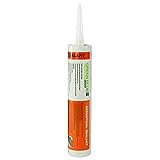 There are a few important reasons why you should consider using St. Gobain Green Glue Noiseproofing Sealant. The most obvious of these is that it has quite a large impact on the amount of sound that can get through any cracks.

This could make it well-recommended if you’re looking to soundproof a room as much as possible. It also shouldn’t take too long to dry, which is coupled with the fact that it shouldn’t develop any cracks over the short-term.

Alongside this is the fact that the canister might be too big for many caulk guns. This could mean that you’ll have to apply it by hand, which could be difficult for many of us.

There are quite a large number of reasons to consider the Franklin International Sound Sealant, with the most obvious being how much of an impact it has on noise transmission. This is one of the better-recommended options in this way, which is why it’s a standout among its competition.

Alongside this is the fact that it’s both mold- and mildew-resistant, which means that you shouldn’t have to worry about either of these in the near future. This doesn’t make it any more difficult to apply, however, as it can be much easier than many others on the market.

Despite this, it has a few notable negatives, with one of the most significant of these being that it can take quite a long time to dry. This could mean that the overall soundproofing process could take much longer than you might have anticipated.

It can also be somewhat difficult to paint over, as the Franklin International Sound Sealant can still show through slightly. The stretching on the may also not be as beneficial as you might expect with another product.

One of the crucial factors to consider when soundproofing a room is that, if air can get in, so can sound. This means that you’ll need to ensure that little, if any, of this can get through, which is what caulk does.

Acoustic sealant, as it’s also known, is quite beneficial for this, although many people may know what differentiates this from its regular counterpart. Alongside this, some might not know what the features of it are. Typically, there are a few key traits, including:

These features are primarily where the differences between acoustic caulk and regular caulk can be. This is chiefly seen in the durability that each offers and which can be one of the more notable advantages of acoustic sealant. The durability aspect will be seen in a few distinct ways.

For example, regular caulk can crack quite quickly, which will undo the soundproofing aspect and mean that you’ll have to repeat the sealing process. The majority of this will be because it can harden quite quickly. Combined with how inflexible it is, and it will start cracking.

While this will be quite an affordable option, it’s far less permanent that you may want, which is why acoustic caulk can be much better-recommended. However, durability isn’t the only way that acoustic caulk can outperform its traditional counterpart.

In contrast, it can adhere to many more materials, which should mean that you’ll be able to apply it almost anywhere. It will also remain supple for quite a significant amount of time, which could make it seem like a rubber-type material.

The majority of products are typically silicone-based, which makes them non-flammable while also working as a vapor barrier. Alongside this, they’re designed specifically for noise reduction, which is a trait that some regular caulks might not be able to boast.

There are a few other differences that help separate acoustic caulk from its regular counterpart, including that it:

The majority of regular caulks may not have many of these features, which is quite acoustic caulks can be much more recommended for soundproofing.

Which Is Better: Acoustic Caulk Or Regular Caulk?

Quite a large number of us will want to know whether or not we should invest in soundproof caulk. After all, it can cost much more than its more traditional counterpart. Alongside this, you may want to know which of the products is better.

In the majority of cases, acoustic sealant can be much better-recommended, thanks to the large number of benefits that it provides. Though there is a noticeable cost difference, acoustic sealant should be much more effective at soundproofing while also performing just as well in all other uses.

As a result, soundproof caulk should be your first choice.

Given that acoustic caulk offers quite a significant number of benefits for soundproofing, it’s the better-recommended option for the process. While this should help you narrow your choice of which products to buy, there can still be a large number to pick between.

However, there are a few acoustic caulks that stand out much more than others. This could mean that they should rank highly when trying to pick one. While each will have its benefits, it’s also worth noting that they’ll have a few drawbacks, all of which should be considering when you’re deciding which one to buy.

Where To Use Acoustic Caulk

While there are a few areas where you can use acoustic caulk may be obvious, many people may overlook some of these. Alongside this, some might try to use it in areas where it might not be appropriate. As such, it’s worth looking at exactly where it should be used to see the majority of its benefits.

Naturally, you should expect to use it anywhere where you see gaps or cracks between two surfaces. Typically, these will be seen between two surfaces, with the most obvious examples being around doors and windows. It can also be used between drywall panels, floors, and much more.

One area that you might not have expected to use acoustic caulk is around wiring and electrical boxes. There are a few reasons why this can be recommended, with sealing them off being just the most obvious.

Alongside this, it can be an easy and effective way to secure them where they’re needed. This should also give electrical boxes and wiring a significant amount of water protection, which can be a large advantage for the majority of us.

While there is a certain amount of water protection, this doesn’t mean that you should use them for underwater applications. Instead, it’s recommended that you instead use a regular caulk for this, although you should make sure that this is silicone-based to ensure the maximum amount of protection.

How To Use Acoustic Caulk 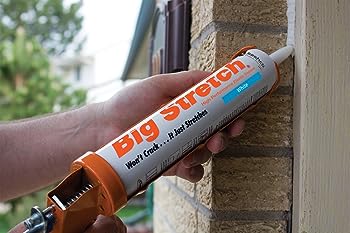 Though using acoustic caulk is relatively simple, it can also be quite easy to do wrong. Regardless of which product you choose, there are a few specific steps that you’ll have to take to use it effectively. The first of these is to make sure you’re in a well-ventilated area.

While many of the products shouldn’t have too large of a smell, it can still be quite prominent and can be overbearing for many users.

This is especially true it relatively small spaces, which means that you should make sure that the area has an adequate amount of airflow when you’re applying the caulk.

You should also ensure that the area where you’re applying it is as clean as possible. The primary reason for this is that any dirt or dust could interfere with how well the caulk adheres to the surface. Cleaning the area shouldn’t take too long, as you’ll typically need to give it a wipe with a cloth or something similar.

You should then cut the nozzle of the acoustic caulk, although this could need slightly more thought than you might have realized. You’ll need to create an adequately-sized hole in the nozzle, which will depend on the surface that you’re applying it to.

Naturally, larger areas will need larger holes, which will mean that you’ll have to make sure that you cut the nozzle in the right place. Typically, you’ll need a pair of scissors for this, although many sealant guns come with a built-in mechanism to do this with.

Sealant guns can often be the better-recommended options for applying the caulk, with this being for a few other reasons. The largest of these is that the tubes can be quite difficult to squeeze and apply the caulk with. However, the guns will make this much easier while also helping you to be more accurate with it.

Once you’ve applied the acoustic caulk, you’ll then need to smooth out the beads that might have formed when you were applying it. While you might want to use a knife or something similar, you can also use your finger to do so.

With the various benefits that acoustic caulk can offer, it’s easy to see why it’s the better-recommended option for soundproofing anything. However, that doesn’t mean that you should choose any available product. Instead, you should put a significant amount of time into making sure that you get the right one for your needs.

Though this may take slightly longer than you might have expected, it should mean that you see the best results possible when you soundproof a room. When doing so, you should make sure that you follow each of the manufacturer’s instructions to ensure that everything is done properly.

While each of the above choices have their pros and cons, they’re each worth a strong consideration.